One of the things I say on stage is, “If I offend some people it’s not my intention, because I want to offend everybody equally… I don’t want to leave anyone out.”

Well I had a gig for Comminsure part of Commonwealth Bank whom I’ve worked for many times before.  I was told to make sure I didn’t offend anyone or upset any races etc.  I thought they maybe wanted me to do a 3 minute routine.  But that was cool, I do love to send up many nationalities including my own and all in a fun way.

So during Sydney daytime in a hotel function room at Olympic Park I had a fantastic crowd.  For about half an hour we could have been downtown New York in a Comedy Club on a Saturday night.  I had a great time at the gig. As cheesy a line as I know this is I loved using it by saying, “I wasn’t sure if I was at the right event and I saw this guy and he said ‘Come in sure’ (Comminsure). They took a couple seconds to get it but they loved it. 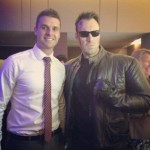 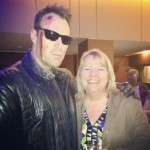 After chatting to Arnie on the big screen, he came out and mingled with the guests for about 45 minutes.  Well he said he’ll be back.  It’s fun speaking in the 3rd person.  Easy when you have 100+ personalities.  So overall a terrific gig and great when it’s a day one and you can fly back home in the same day.

A few days later came a dream gig.  Well a gig in Dreamworld anyway. I MC’d a Gala Dinner for Plumbing Plus.  Imagine the jokes I could do about plumbers, I know a few cracks 😉

It was great to escape a cold Melbourne winter day and go to the Gold Coast even if it was just 1 day and to top it off I was staying at the Sea Temple in Surfers Paradise.  An amazing place!

Before the gig at Dreamworld I got to hang out backstage where all the costumes are for all the Dreamworks characters such as Kung Fu Panda, Shrek, King Julien, Alex the Lion etc.  Many of the impressions that I do. I couldn’t resist putting the Kung Fu Panda head on me while I was waiting backstage which made a fun photo for the kids and maybe a tad scary also. 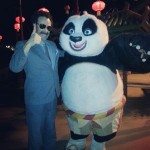 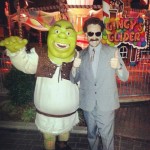 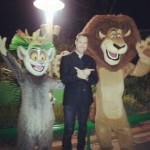 The first part of the gig was roving around Dreamworld as Borat…as you do.  This involved getting photos with the crowd and mingling in character and yes even riding on the Dodgem Cars.  At this point I thought I have the best job in the world.

Then I MC’d the rest of the night as myself and about 50 characters and even had a chat to Arnie on the big screen.  It was another great gig.  Apparently the audience had all had a huge night the night before as often happens with some audiences when they are on a conference and so they were a bit of a tired audience.  But still they were fun and it was a great experience to do a gig in Dreamworld!  Made me think how I’d love to do a show there at some point just for kids and doing all the characters from Kung Fu Panda, Shrek, Madagascar and more.

I would have no hesitation recommending Ben Price for any type of function or event. His ability to make you instantly recognise each one of his many characters is incredible. Then the humour in each portrayal had our guests collapsing with laughter. My favourite was Ben’s De Niro – I am forever in his ‘Circle of Trust’. You owned it! 10 out of 10!

Ben Price is the perfect vitamin for your funny bone!

Ben Price was fantastic, working our audience. The amount of people he impersonated in a small amount of time was excellent and very funny.

Ben Price is a very talented, funny man and he had the entire room laughing – I would highly recommend him – his impersonations are hilarious.

Thank you for your contribution to our conference, your performance was full of energy, funny and lots of laughs. Appreciate the effort in tailoring making it to our 80’s theme and Quest as well (eg 30 sec movie grabs etc).

Feedback from the delegates has been terrific on your comedy routine and helped make the conference dinner a memorable one.