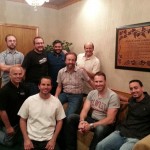 Ben Price was the MC and entertainment for our company’s annual Gala Dinner Awards night. He was hilariously captivating and it was amazing to see how he can just flip from one character to another in a split second without skipping a beat. His live feed video impersonation of Donald Trump had the crowd in absolute hysterics! Ben set the perfect mood for our function and we would not hesitate in having him out again!

He was fantastic. The audience were really engaged and seemed to enjoy the performance, and afterwards, he had a bit of a groupie thing happening.

Ben has an amazing ability to capture the essence of a character; how a person looks, talks, walks and feels. He could probably even reproduce how they smell, but that would probably cost extra. Ben doesn't just impersonate someone, he inhabits them.

- Tom Gleisner (The Panel, Have you been paying attention)
View all testimonials