Ben Price on The Daily Edition

This was Ben’s 1st appearance on The Daily Edition on Channel 7. His 5th live TV appearance for the year and the 7th TV appearance for 2017. Being mid-year school holidays in Australia, Ben provided a number of voices from a few current movies such as Lego Batman, Spiderman and Despicable Me 3. Along with usual favourites such as Morgan Freeman, Arnie and Donald Trump. 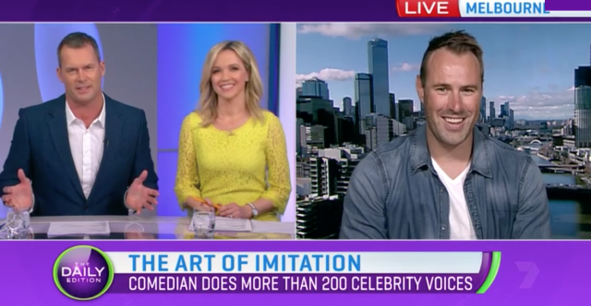 You mean he's not the real thing? - can we have our money back?...Seriously, Ben Price is a genuine superstar, we're in awe of the guy!

Thank you for your contribution to our conference, your performance was full of energy, funny and lots of laughs. Appreciate the effort in tailoring making it to our 80’s theme and Quest as well (eg 30 sec movie grabs etc).

Feedback from the delegates has been terrific on your comedy routine and helped make the conference dinner a memorable one.

- The Age
View all testimonials